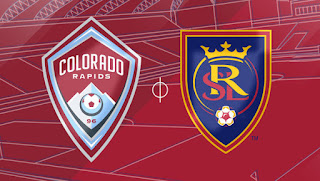 Today is the first game of three games for the Rocky Mountain Cup.  This rivalry gets tested a bit more with the announcement coming from MLS HQ late last night that Tim Howard will have to serve a 3 game suspension for some profanities yelled at a fan.  For those of us who saw the team implode in KC, also saw that Timmy had a bad game as well.

We had hoped that Tim would be the backbone in today’s match, as he stood on his head in a gut-wrenching loss to RSL last year.  In the podcast Matt pointed out that RSL has fired 77 shots, with 23 on goal and 8 that have found the back of the net.  In comparison, the Rapids have fired just 30 shots, 9 on goal with just 4 goals.  Zac MacMath and company will have their work cut out for them.
If this team can show us that they will still keep fighting, despite the “rebuild” in tactics, this would be the game to do so.  There still is a home unbeaten streak on the line and if this season is truly a rebuild, the Rocky Mountain Cup may be our only chance at hardware this year.
Don’t be surprised, or scared, if we see the same lineup today as we did last week in Kansas City, with the exception of Howard of course.  Nana Boateng and Michael Azira are going to need time; it’s not like the Cronin/Azira duo was that solid in the beginning.  Gashi didn’t get his first goal until this time last year, Doyle just got his first and Dillon Serna hasn’t been 100% yet.
In a weird way, today’s game is almost like another season opener.  Coach Pablo said that last week’s game was like coming out of preseason. If that is how we are going to look at it, then we should see some progression of chemistry from last week to today.
In the last 6 games against RSL the Rapids have 3 wins when tied at halftime, they have tied once when leading, and lost twice when losing.  It would be wise to press and let RSL run around a bit for 45 minutes, but we cannot concede a goal at all.
The Voice of C38 will be providing pregame entertainment at the tailgate as always, with Axel Sjoberg as our special guest.  He is due to arrive at the tent at 6pm.   Come join us, and wish Axel the best of luck on his recovery.
Predicted starting XI: MacMath, Miller, Watts, Ford, Williams, Boateng, Azira, Hairston, Gashi, Badji, Doyle.