By Brian Jennings
It was an improbable ending to a solid effort for Colorado at home Saturday night against hated rivals Real Salt Lake.  What looked like a circa-2016 Rapids gut check win was swiped late by a stray forearm and a shot out of nowhere sealing the home loss.
One bright spot was the MLS debut of newcomer Joshua Gatt as a late substitute for the Rapids.  In his first minutes since coming over from Minnesota FC, Josh made a slashing run on the ball into the box where he ripped a shot just wide right in what could have sealed the victory.  “I’m happy to get my first appearance in the league,” Gatt told The Voice of C38 in the postgame locker room.  “Coming in that late, obviously you want to shore up the game and close it out since mine (aim) is to try and get a second goal and seal it and win the game that way.”
“But overall it was an unfortunate situation that happened at the end of the game and tilted it on its head.  For 86 minutes, we were a great team, a better team than (RSL) but that’s the game of football.  You can dominate for 95% of it but for 5% if you switch off it can be the end of the game.”
That it was shortly after as RSL was awarded the fateful penalty kick off the one handball of the match which was actually given by the referee but this time against Colorado.  However, as midfielder Dillon Powers tells The Voice of C38, the response by the Rapids should have been more forceful.  “The one thing we could’ve done was respond after that and at least come out with a point.  We understand we want to win at home, but we’re down a man so let’s just get out of this,” explained a thoughtful Powers absolving no one including himself postgame. 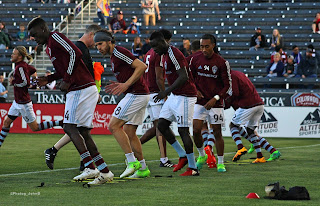 “There we could have done a better job, especially some of us who’ve been in those moments.  We had so many moments like that last year in a 1-0 game just having to hold on.  That was very frustrating.”
Frustrating especially given the way Colorado’s game plan had worked to a letter for the entire match up to that point.  After a tough result on the road last week in Kansas City, Powers explained there were some team adjustments planned and followed pretty well early on.
“We had a lot of passion last game and sometimes that overrode our intelligence.  This performance we really wanted to come out and be focused, be smart, let the game come to us, and I think that allowed us to get into a good rhythm early on.  It’s not relaxed but smart, focused type of energy.”
However, as the game wore on, Powers admits he saw something collectively that usually comes back to haunt a team that plays on the fine line the Rapids do.  “The last two minutes of that (first) half they had a lot of good chances and were kind of all over us.  I thought we made some great adjustments at halftime, we were really focused coming out for the second half, and for 40 minutes I don’t think we gave up anything.  It’s just one moment killed us.”
“It’s a classic psychology-you score a goal and all of a sudden you’re scared to lose it and the other team has nothing to lose so they push numbers forward,” said Powers.  “It’s about focusing in that moment saying, ‘we’re up a goal, let’s get another one’.  We can’t change things, and that’s really hard to do sometimes because the team psychology switches.”