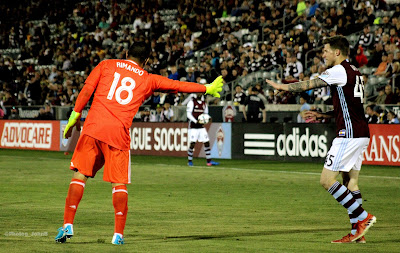 In a heartbreaking loss to Rocky Mountain Cup rivals Real Salt Lake Saturday night at home, Colorado was both stunned and gutted at the result.  However, as professionals in a long MLS season, players like Joshua Gatt know they don’t have a lot of time to stew over the mistakes and rue missed chances.
In fact, Gatt offers some personal advice he was given years ago that he will call upon as the Rapids get back to work Tuesday in preparing to face Minnesota FC on the road.  “I was always raised on the 48 hour rule, as my Dad would say.  I would get two days to think about what I want to do or how we move forward.  After that, you recycle and move on,” Gatt explains.
“Everybody here is professional and we know the drill.  Down periods happen and it’s up to us to really get us out.  I don’t think there’s too much pouting it’s just anger and frustration. By next week, it’s time to get to work and get the points we need.”
Midfielder Dillon Powers was visibly down immediately following the loss at the weekend, but was already looking at how the result can be used more positively going forward.  “I think it could be a great opportunity for us to say, ‘hey, this is how cruel it can be’ so let’s learn from this and we’ve got to prepare and be accountable in those moments,” he told The Voice of C38 exclusively after the loss.
“Bottom line is for 85 minutes we played good soccer, and we probably deserved to win that game.  For 5 minutes, we let it go so we can’t just blow up the whole thing because there were some good things.”
“It was hard to believe but we had a lot of things go our way last year so we’re not feeling sorry for ourselves,” said a determined Powers.  “We can’t start creeping in a hole and losing 2, 3, 4 in a row.  We’ve got to stop the bleeding and go get points.”