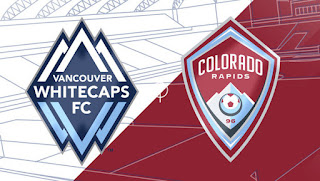 Game on!  It’s as if the Rapids have been distracted by the metaphorical cars that are injuries, suspensions and illnesses.  At least that is what Garth would have told Wayne after a few got past him.  Have no fear, it’s game day once again and time to focus on the Vancouver Whitecaps.
The Rapids play host to Vancouver, who have won and then lost every other game so far this season.  With a 3-2 record over the last five games (WLWLW) the Rapids are in a place to keep the pattern going and give the Whitecaps their next loss.
A lot of grit, talent, and a bit of luck will have to play it’s part in order for that to happen though.  As Rapids fans we are learning that luck does play a part in this sport and we got a bit lucky last season, especially at home.  Let’s bring the luck for the burgundy boys tonight.
Tim Howard returns to his post, between the posts but first, a tip of the cap to Zac MacMath.  Zac won player of the month and won save of the week twice.  We’ve got depth at the keeper position, that’s for sure.
As for the offense though, I’d like to think that most of us would want to see some sort of mix up from lineups past.  Including Shkelzen Gashi, who we all want to see get the start.  Since there seems to be a “who knows, everything goes” mentality among the message boards, I’ll do the same with my lineup predictions.
Without Lil Dill and Gashi, the creative production and the amount of shots taken are not there.  The Rapids have scored just 5 goals so far with 16 shots on target.   Tonight’s opponent has 11 goals from taking 27 shots on target.  Remember these are shots on target, not just shots.  Last week of the three shots taken, only one was on target, Gashi’s.  The other two shots came from Alan Gordon and Dillon Serna.  Two of the three shot takers had minimal time to make an impact on a game that was slipping out of the Rapids hands.  It’s in the best interest of all things Rapids for Serna and Gashi to get maximum minutes.
Kevin Doyle has a work ethic that can’t go unnoticed.  We may have thought at times he may have been a bit removed; when you’re a guy who needs great service for headers and isn’t getting them, it would be human to get frustrated.  With guys like Gashi, Serna, and Hairston, Doyle would get the service he needs.
Dillon Powers has the ability to own the midfield.  With the guys I just mentioned playing in front of him and with what Michael Azira brings to the table, Big Dill is looking at a chance to return to rookie form.
Kortne Ford returns to the starting lineup after serving a suspension.  This is another big and somewhat emotional game for him.  His mother’s battle with cancer isn’t over, this time it’s in the bone.  C38 and the Rapids would like to let him know that we all are sending all of our best thoughts, vibes, hopes and prayers to the Ford clan.  Not just by my little pregame article, but by standing up in the 24th minute. Let’s standup to cancer and show our support to Kortne and his mother.
This roster has plenty of guys with talent, grit and determination. It’s on us the fans to bring the good vibes and hopefully the luck will soon follow.  Kickoff is at 8pm, if you can’t make it to the game, it will be aired on AltitudeTV.
Hopeful Starting XI: Howard, Miller, Watts, Ford, Williams.  Azira, Powers, Hairston, Serna, Gashi, Doyle.