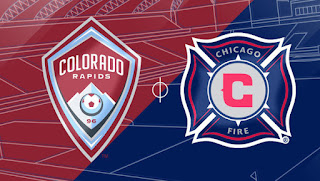 Tonight’s match-up between the Rapids and Fire is the first of three games in a ten day stretch for the burgundy boys.  The biggest question is will the Rapids stay with the formation change that was implemented on Saturday against San Jose, will it remain the same? My gut and sources tell me that it will.
Now, will it be the same 11 cats that put on a wonderful display of soccer last Saturday?  We can only speculate as to who sits and who may get a rest in order to play against the Union on Saturday; as the team traveled after a short day of training on Monday and won’t be returning until Sunday.
Chances are, we will see the same 11 that came out against San Jose and the changes will be made for the Philly game.  Some of the younger guys can go 180 minutes in a week, while others like Allan Gordon, Bobby Burling, and Kevin Doyle will split their time on the pitch with guys like Caleb Calvert, Kortne Ford and lil Dill.
In the past it’s been easy to not take Chicago seriously.  In fact, it was just last year that the Fire was the basement dwellers of the league but they have made some changes and are once again back in the limelight.  The Rapids are 14-18-9 against the Fire, with an embarrassing record of 4-15-2 in Chicago.  It took years to notch their first win at Toyota Park and this season the Fire are undefeated at home with a 4-0-1 record.  The Rapids do have a good record when it comes to midweek games though, posting a 53-51-24 record, with a record of 39-38-18 on Wednesday’s.  The Rapids and Fire have played 11 Wednesday games and although the Rapids are 5-2-4, they have won just once in Chicago. It was 2-1 on May 3, 2000.
It’s not Bastian Schweinstiger that worries me.  Yes he can still play, and can produce key passes to feed guys like Luis Solignac and Nemanja Nikolic, but it’s those other two that worry me.  The Fire also have a coach who the club is behind and has a proven track record with youth, specifically Serbian youth.  That might be where he found Nikolic, who has 8 goals and an assist in ten games so far this seasom.  Jared Watts is going to have his work cut out for him in order to keep the Serbian designated player off the score sheet.
So maybe the odds are once again stacked up against the Rapids, but that does seem to be the way they like it.  As long as there isn’t really any changes to the formation and mentality, the burgundy boys will put up a fight, maybe one that is worth three points.
It’s a 6:30 game which can be seen on AltitudeTV. There is no official watch party for this game, so grab a six pack or find that waitress who will change the channel and let’s see if these boys can start a streak.
Predicted starting XI: Howard, Hairston, Watts, Burling, Miller, Powers, Azira, Saied, Gashi, Badji, Gordon.