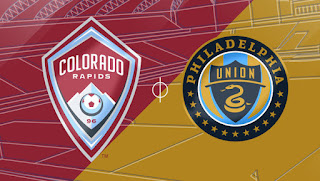 The best part of having games just days apart is, it’s a shorter time between the loss and the next chance you get at a win. The hangover from the last result is not as prolonged; it’s a shorter time to dwell on before moving on.
The Rapids are out East-ish, in Philly tonight to take on the Union.  Now, is this the same Union that we all have been hoping to drop points so the Rapids wouldn’t be the worse team in the league? Or, are they a team who has found their form and are to not be taken lightly?
Philly had a bit of a rough start going 0-4-4, but since a draw in LA the Union have gone on to be unbeaten in 5, and hold a three game shutout streak.  Not to mention they have scored three or more goals while shutting out their opponent.
As for the burgundy boys, something changed from what the team did against San Jose, despite the same starting lineup.  Something else needs to change in order for the Rapids to get their first win on the road this season.  The Rapids have done well in Philadelphia going 2-0-3 overall, last year they tied 1-1 giving up a goal in extra time.
The Rapids are going to need Axel tonight.  CJ Sapong is a monster this season with seven goals and two assists in 11 games played.  Like Nikolic, the Rapids will have to take Sapong seriously but cannot give him too much space or he will burn us.  Unlike Nikolic, we are familiar with CJ Sapong and we need Axel to be on him like flies on horse shit.
As for who else can help the burgundy boys get at least a point, may I suggest Dillon Serna?  He made the trip, was not on the bench Wednesday, but training fully.  A healthy, fit and ready to go Serna could be key to what might have been missing.  I’ve seen him work with Gashi and it can be a beautiful thing.
Kevin Doyle is another guy who I think should get a run.  Assuming the 4-4-2 is still the formation (I can already hear some people say “now they have an excuse to go back to the 4-2-3-1”) Kevin Doyle could be productive. Between services from Serna, Powers, or Badji, how could Doyle not get chances?
The battle of the bottom of the table will begin at 5pm tonight on AltitudeTV.  C38 will have taken over the Bladium turf from 3-5, all skill levels can play and then catch the game after.
Predicted starting XI: Howard, Hairston, Watts, Sjoberg, Miller, Serna, Powers, Azira, Gashi, Badji, Doyle.