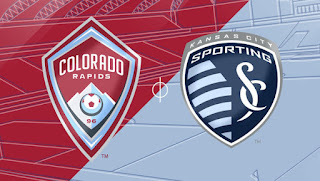 Sporting Kansas City is in town for the rubber match with the Rapids.  The burgundy boys didn’t do so well in KC last time, but that doesn’t mean that the Rapids can’t take care of business at home.  With a 17-5-8 at home against Sporting KC the Rapids have done well against those guys to the east. Coach Pablo is 5-3 against Peter Vermes, meaning there are only winners or losers when these two meet.
This month is stacked full of road games for Sporting KC.  Today’s game is their 5thgame in row on the road and the Wiz-errr, Sporting KC, has gone 0-3-1.  The Rapids and Houston are the only teams to have yet to bag a point on the road.  Good thing for the Rapids that they have the next four games at home.
Another bit of good news is that Axel Sjoberg is back and ready to go.  The Rapids didn’t have the big man last time they played Sporting KC and if anyone on that team doesn’t want Axel out there it’s Dom Dwyer.  Axel has made Dwyer’s life difficult in the past, so we should expect nothing less today.
There has been some mention of how Pablo has used ten different starting lineups in 11 games.  Last week there were seven changes made to the roster, the second most.  The largest fire-sale of the lineup was June 4th 2014 against Chicago, following a win against Houston.  We will have changes once again this week as Jared Watts is still recovering from a calf concern.  Caleb Calvert will be sitting for at least a game after that confusing mistake that cost him a double yellow last week.  On the bench, Conor Casey will be missing after he saw red against the Union.  I saw two different forward combinations at training this week, one was Kevin Doyle and Dom Badji, the other was Alan Gordon and Josh Gatt; interesting duo’s, but I like the pairs and think either could produce some goals.
Jared Watts mentioned on The VoC38 podcast that the guys are frustrated too, and that this home stand is what they feel is needed in order to get some points.  Now it’s a fight for pride, as well as the playoffs, the season is not too far gone.
Kickoff is at 6pm for this one, tailgate taps it’s kegs at 3pm.
Predicted starting XI: Howard, Hairston, Burling, Sjoberg, Miller, Saied, Powers, Azira, Gashi, Doyle, Badji.