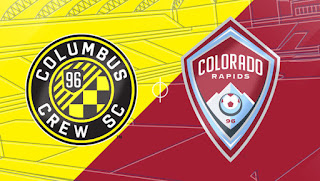 The Rapids are home against The Crew tonight and the trend of changing the lineup will continue.  With international duty, injury concerns and suspensions the Rapids will be putting together another mixed bag of a lineup.
Tim Howard is with the USMNT, Mekeil Williams is with Trinidad & Tobago, Bobby Burling is suspended; while both Axel Sjoberg and Jared Watts have been questionable due to not being 100%.  Does that mean Coach Pablo will be forced to finally play Dillon Serna?  My bet is no; I’ve seen the signs and feel we may have seen the last bit of quality time from lil Dill.  The back four will most likely be the two rookies at center-back; Kortne Ford and Mike Da Fonte with Eric Miller and Marlon Hairston outside of them.
Even though Tim is with the USMNT it doesn’t mean we are weaker at the keeper position.  Every match Zac MacMath gets; he will give it his all and he hasn’t really let us down yet.  MacMath sticking around might just be subtly one the best player moves made in the off-season.  Some things take time to show themselves and having a solid keeper ready to go when the time comes is vital to keeping a team together during a hot or cold streak.
As for the opponents, tonight’s game is the third game in a ten day stretch for the Crew.  A 5-0 loss to Toronto last Friday was followed up with a 3-1 win against Seattle on Wednesday.  C-Bus seems to give up almost as many goals as they score, but we learned last year that going up against some of the worst defenses in the league doesn’t mean the Rapids will run away with the game.
Overall the burgundy boys have the upper edge against the Crew with an 18-12-10 record and 11-4-5 here at home.  On the flip-side of that though, the Rapids have not won in the last three meetings against C-Bus, losing twice here at home.
This game will be no different for the Rapids. With the mentality to defend first and attack if it happens.  The club has never said that is how we will approach games; but after enough time of repeating the same things, I think you would be oblivious to think this team will put a game away without a white-knuckle ending.
On an attacking note, tonight the Rapids honor the club’s best attacker and current assistant coach Conor Casey.  Someone had said “took them long enough” referring to the club honoring the clubs highest scorer but then I reminded them that CC finished playing last year.  If anything, he is being honored faster than any other player that deserves this honor.
Stick around after the match for the Rapids SO team as they take on the Crew SO in their home opener.
Predicted starting XI: MacMath, Hairston, Ford, Da Fonte, Miller, Saied, Azira, Powers, Gashi, Badji, Doyle.