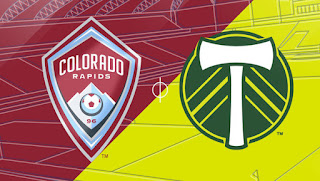 The Rapids are back in MLS action tonight as they take on the Portland Timbers at home.  Just in case you missed the announcement a few months back this game was originally scheduled for Father’s Day.  TV scheduling conflicts required it to be moved to today.
The other time change is that of kickoff.  It’s at 7:30 tonight, meaning we will start the tailgate a little bit later and we will be playing the tunes until about 7.  The Voice of C38 crew is also expecting a visit from Eric Miller’s Ma & Pa. If you want to know more about one of the Rapids’ rising defenders, this might be a good time to swing by.
There may only have been a thousand of us or so who saw the backup brigade come from two goals down to beat OKC Energy on Tuesday; but those of us who saw it, saw the burgundy boys fight to the end.  The “Keep Fighting” mentality that turned cliché over the last season has been missing over the past month or so; but the boys are looking to build on the momentum from the last two come from behind wins.  They may have found the fighting spirit that was lost during the offseason.
At home the Rapids are 6-7-3 against Portland.  Portland has giving the burgundy boys some problems in the past, both at home and away.  On the flipside, the Timbers struggle to perform on the road.  With a road record of 2-4-1 this season the Timbers offer less of a threat when they are out of the shadows of Mt Hood.
Some injury notes as we prepare for kickoff, Bobby Burling will be out for a month or so after picking up a knock on Tuesday.  Jared Watts may not be 100% as he finished Tuesday’s match from the sidelines with a bag of ice on his knee.  We saw Gashi get carted off last week against C-Bus and is listed as questionable for today.  Nana Boateng is still out; I still give him another month or so.
Some positive news on the injury front is that Axel Sjoberg is expected to be 100% and available for selection.  Tim Howard is back from national team duty, as well as Mekeil Williams.  The likeliness of a Watts/Ford combo on the back line is worth putting money on.  You may also expect Hairston and Miller to return to the flanks.
The question at hand is who will be on the left side in place of Gashi?  Will it be Josh Gatt?  Could we see Dom Badji or Kevin Doyle slide to the outside?  On Tuesday we saw the Rapids line up in a formation that was much like a 4-3-3.  This may be the best formation possible with the players we have available and in form.
Don’t forget its pride week; there are scarves available for this special weekend.  Tailgate starts at 4:30.  As for the guest as mentioned earlier, we expect Eric Miller’s parents to make a visit.
Predicted starting XI: Howard, Hairston, Ford, Sjoberg, Miller.  Azira, Powers, Saied, Gatt, Doyle, Badji.